Basseches’ Dialectical Schemata Framework, with no criteria for emotions, and little on relationships: 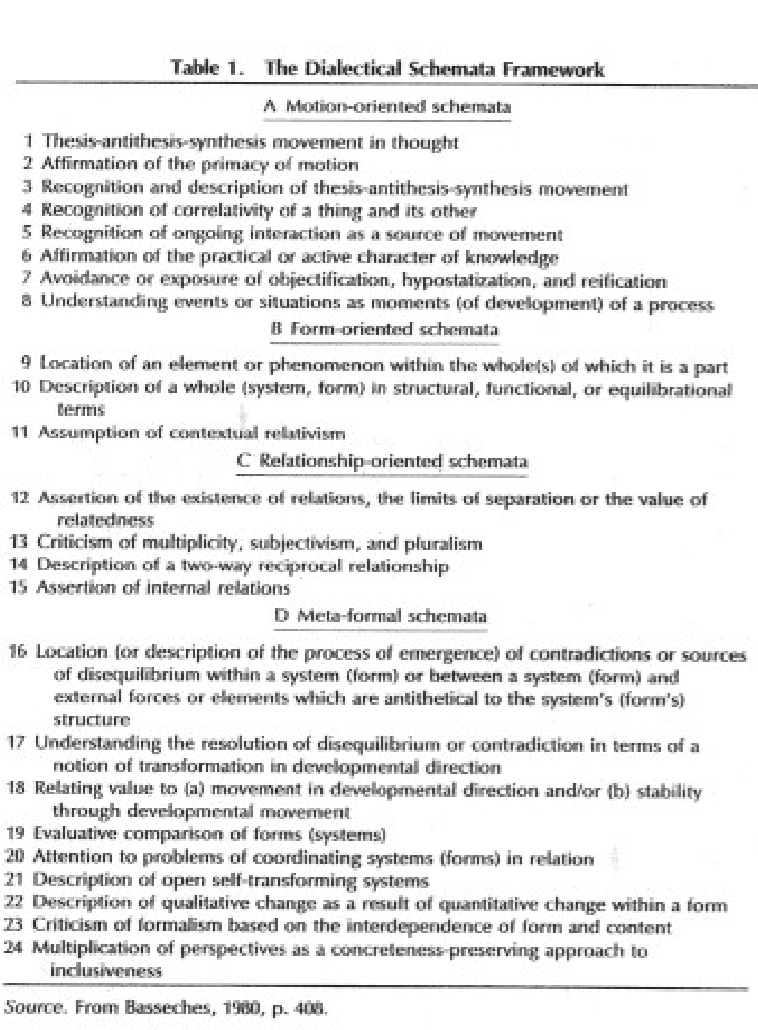 Dialectical Thinking and Formal Operations:  the Debate between Basseches and Riegel

Michael Basseches worked in the structural-developmental mold with Lawrence Kohlberg and Robert Kegan in the 1970s and 1980s, and has more recently worked his constructivist developmental perspective into the psychotherapy process and clinical supervision.  In his book Dialectical Thinking and Adult Development (Ablex, 1984), he used the same argument that Kohlberg used to counter Carol Gilligan’s  criticism of the limits of formal operations.  This argument is basically that if you think the status quo needs to change, then the only way to prove that you are better than the status quo is to build a new status quo (pp. 270-3).

Which is the argument that the Walton family uses when criticized for the poor pay and lack of benefits provided by the Walmart Corporation — “If you think our stores should be better, don’t criticize us, build your own store!”  [Which, by the way, is called Costco!]  But Costco was not built in a day, and long-term struggles, such as social justice and peace, require more persistence than Basseches’ philosophy seems to accept.

Back to Riegel, let’s see how this debate goes.  Riegel didn’t refer to Basseches by name, but Basseches referred to Riegel a number to times in his 1984 book.  Note that Riegel died in 1977, seven years prior to the publication of Basseches’ book:

At the beginning of this section, I stated that Riegel seemed to ignore the complementarity between dialectical and formal reasoning.  My greater emphasis on this notion of complementarity many be seen as the root of the differences in our approaches.

My stress on complementarity has led me to describe dialectical schemata [DS] as a form of cognitive organization which permits the maintenance of fluid, constructive cognitive functioning in the context of the use of formal structures.  Unlike Riegel’s “dialectic operations,”, DS as a coordinated whole was deliberately conceived as (a) presupposing formal operational thought, (b) an elaboration of formal operational thought, and (c) establishing the limits of formal structures.

It is the integration of the ability to employ the powerful stability-maintaining cognitive tools of formal operations when useful, with the ability to recognize when one has come up against the limits of any given formal model and to break through or transcend those limits, which, for me, characterizes the full elaboration of dialectical thinking.

Implied in my calling the “non-formalist” pattern a form of partial development of dialectical thinking is a recognition of the limitations caused by the inability or unwillingness to use formal operations to describe the functioning of structures.

I do not deny Riegel’s claim that there is value in any thought mechanism which allows for the entertaining of contradictions and the maintenance of the dialectical aspect of cognitive functioning described by the assimilation-accommodation model.  However, if this fluidity were maintained at the expense of sacrificing those abilities to grasp and create stability which I view as essential to the organization of modern civilization, I would not equate such thinking with cognitive maturity.         (pg. 219)

Klaus Riegel was best known for his work on aging and cognitive decline during the years before death.  According to his 1977 obituary, “in 1976, the Gerontological Society recognized Klaus Riegel’s contributions by presenting him the the Robert W. Kleemeier Award.”  His research helped the health care industry better prepare for the rising tide of Alzheimer’s patients, which helped stabilize many bewildered patients and caregivers.

Riegel’s work on dialectics came out in a few papers during his lifetime, but his book Foundations of Dialectical Psychology (Academic Press, 1979) was not published until after his death in 1979.  Let us consider a tasty tid-bit from that post-humous book:

Last Part (5) of A Manifesto for Dialectical Psychology, pg. 16.

Perhaps in their attempt to escape the difficult concept of the relation of relations, Marxist dialecticians have preferred to anchor the dialectics upon an inner-biological and outer-physical material base.  But their attempts, in the end, seem to give away the notion of activity, labor and effort in preference for commodity, product, and result.  But dialectical theory neither needs to be materialistic nor idealistic; it can encompass a manifold of different conceptions.  The theme of the dialectics always needs to be translated however into new forms appropriate for a society (including its sciences) at a particular historical time, that is, dialectics needs to be applied to dialectics itself.  I am committed to help in the new translation.  Let there be a hundred new flowers blooming.

Dialectic psychologists unite!  You have nothing to lose but the respect of vulgar mechanists and pretentious mentalists; you will win a world, a changing world created by ever-changing human beings.

Although the style is free-wheeling, the ideas are still clear.  He is not advocating for an idealistic (e.g. Hegel) or a materialistic (e.g. Marx) dialectics, which spares his views from materialistic violence or idealistic irrelevance.  He doesn’t name any of the “mechanists” or “mentalists” that he characterizes as “vulgar” or “pretentious.”  Basseches scrutinized the ideas in Riegel’s writing to question Riegel’s “maturity”, but I think we can better trust those who actually knew the man, as is apparent from Riegel’s obituary:

It is with great sorrow that we note the death of Klaus F. Riegel on July 3, 1977 at his home in Ann Arbor at the age of 51.  Klaus wrote in a recent paper that no individual can work in isolation from the efforts of countless others, so that a discussion of work and labor necessarily converges upon the topic of social cooperation and, ultimately, of love.  It was in this spirit that Klaus interacted with his many students, who will remember him as a kind, patient, and generous teacher, always willing to listen and encourage.  His office, as well as his home, were havens for several generations of students, who found their widely divergent ideas not only tolerated but also clarified and strengthened.  In the scholarly and sociable atmosphere which Klaus created, they learned much both from him and with him.  His colleagues will recall his unrelenting energy in contributing to the growth of developmental psychology and in motivating others with his enthusiasm and insights.  Many will regard it as an honor to have entered into dialogue with him.  [In Memoriam, Klaus Riegel, November 6, 1925 – July 3, 1977 in Human Development 20:  317-325 (1977)]

Sounds like a pretty mature, well respected and beloved individual to me!

Riegel and Gilligan are not the only researchers that Basseches dismisses as insufficiently serious and not up to his DS criteria.  Here is what Basseches writes about James Fowler:

Fowler hypothesizes a “normative endpoint” to faith development in which the tensions, dangers, and divisions which result from the dialectical thinking of Stage 5 are resolved.  I am hesitant to comment on this normative endpoint, which calls Stage 6 Universalizing Faith, in part because it is more of an ideal than an empirical phenomenon.  Also, I confess, my hesitancy may spring from my own developmental limits — the ideal Fowler describes seems so distant from my experience that I can barely claim to glimpse it, much less to understand it.  Finally, I am hesitant because achievement of this stage seems to depend on using direct spiritual participation in the transcendent to remove the individual from living in his or her time of history, and to enable him or her to live more fully in what for others are merely ideals for the future.  The tension between stability and change is transcended by a complete sacrifice of the former for the latter.  As Fowler describes it, achievement of this Stage is much more a matter of Grace than of psychological development.  (pg. 250)

This paragraph demonstrates a surprising ignorance of social justice history, which is an “empirical phenomenon”, not just “an ideal.”  To say that the ideals of MLK and Gandhi are “merely ideals for the future” is to belittle the fragile accomplishments of leaders very widely admired.

And as we can see from James Fowler’s obituary (Oct. 16, 1015), Fowler himself was widely admired:

Jim loved his work, music and singing, and the mountains of Western North Carolina. Most deeply, he loved his family. Strengthened by a profound abiding personal faith in God, Jim lived a full and accomplished life, maintaining remarkable courage and grace during his battle with Alzheimer’s disease. He faced each day with an infectious enthusiasm and never lost his essential kernel of caring and concern for others. Jim transitioned from this life on a beautiful fall day with the people he cherished by his side at Fountainview Center for Alzheimer’s Disease where he was lovingly cared for by his devoted wife and excellent staff for the last year of his life. His final gift of love to his family was the donation of his neurological organs to the Alzheimer’s Disease Research Center at Emory University.

Riegel provided the research that developed the kind of care that Fowler benefitted from in his last years suffering from Alzheimer’s.  Fowler provided a memorial service and kaddish after Kohlberg’s suicide (1987), giving some consolation to the grieving.  I am not sure what lasting gift Basseches has to bestow on humanity; maybe I will just have to wait.