Whereof one cannot speak, thereof one must be silent.  This is perhaps the most famous quote from Ludwig Wittgenstein.  It highlights the nature and limits of language, but is sometimes used to silence critics, as the quote from Max Black below  reveals:

To draw attention to a philosopher’s metaphors is to belittle him — like praising a logician for his beautiful handwriting.  Addiction to metaphor is held to be illicit, on the principle that whereof one can speak only metaphorically, thereof one ought not to speak at all.  Yet the nature of the offense is unclear.  I should like to do something to dispel the mystery that invests the topic; but since philosophers (for all their notorious interest in language) have so neglected the subject, I must get what help I can from the literary critics.  They, at least, do not accept the commandment, “Thou shalt not commit metaphor,” or assume that metaphor is incompatible with serious thought.   (Models and Metaphors, Cornell, 1962. pg. 25) 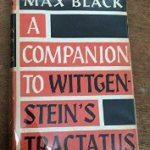 Cornell 1964:  I am sure Wittgenstein would have said something if he thought Max Black inferior to the task.

Max Black was a student of Ludwig Wittgenstein and Bertrand Russell at Cambridge (he wrote texts on Wittgenstein’s Tractatus Logico-Philosophicus and Russell and Whitehead’s Principia Mathematica), and is considered a founder with Wittgenstein on the philosophy of language (see Max Black’s biography at the New World Encyclopedia — a link will time out, so you will have to google it).  But not all Wittgenstein scholars recognize the kinship — a philosophy professor told me that Black and Wittgenstein were no more than acquaintances at Cornell, a fact belied by the biography referenced above (and the books published which are here shown). 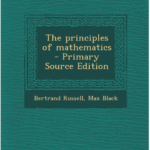 Bertrand Russell stooped to write with a metaphorist in this important work.

Now the situation in which this conversation occurred did not call for argumentation, and at the  time I was actually somewhat pleased with the philosopher’s comment since I was reading researchers who used analogical thinking and abductive methods with explicit reference to Wittgenstein.  In the field of developmental psychology, Jerome Bruner applied Wittgenstein’s perspective on language games to study language development in the tradition of Vygotsky — he also wrote extensively on metaphor and its role in intellectual history.  Jane Loevinger is another example of an applied Wittgensteinian researcher in developmental psychology who identified developmental themes in sentence completion studies.  Analogy and metaphor are related (the first more often found in philosophy, the second more often found in literary studies) and are essential to the creative process call “abduction” (as distinct from induction and deduction).

So I stick to my Max Black, metaphor-heavy version of Wittgenstein’s legacy, because so much of language use is metaphor in action.  It is the only way to be very articulate, and the more articulate people are, the more they are able to help create harmonious social relations (rather than end up saying “You can’t say that!” while using a cryptic Wittgenstein quote to authoritatively rap the gavel on further discussion).  In his later years, Wittgenstein taught primary school in a rural village — although his education and social standing was intimidating to most in the community, and he was known to be generally harsh with his classes — students that rose to the challenge loved to engage him in language games at evening tutorials.  If we rooted out the metaphors in these lessons and conversations, there wouldn’t be much teaching, learning, or conversation left.